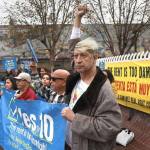 A closely watched ballot initiative in California was defeated in November’s election.  Proposition 10 would have allowed cities to expand rent control by allowing local governments to set rent control policies for their cities, contrary to current law – which was upheld by the failure of Proposition 10.  According to the SF Chronicle, the measure was placed on the ballot by tenant advocates who had failed for years to persuade the CA state legislature to curb rising rent.  Indeed….How restricting supply and hamstringing landlords would lower rent prices is beyond our comprehension abilities.  Then again this is California, and sometimes they do overreach with their goofy ballot initiatives.

“Opponents, led by the California Apartment Association, developers and property managers, spent $74 million to convince voters that developers would cut back on construction if rent control spread. Proponents raised $26 million, nearly all from the AIDS Healthcare Foundation.”

Click here to read the full story at the SF Chronicle.