Mortgage Fraud is Getting Worse 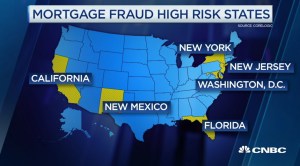 According to new data from CoreLogic, mortgage fraud is on the rise as more people lie about their income in order to qualify for loans.  CNBC’s Diana Olick reports that loan applications for real estate purchases are more likely to have fraud than for refinancing because higher interest rates have slowed refinancing activity, making mortgages a larger share.  In addition, Fannie Mae says tips are on the rise from law enforcement, consumers, trade groups and lenders.  Olick points out that the internet is making it easier and that a casual search reveals many online services that, for a fee, will not only generate fake pay stubs, but will also answer phone calls that “confirm” your purported income.

“The biggest jump in mortgage fraud risk was due to income reporting, up 22 percent annually. Since the epic housing crash a decade ago, lenders have had very strict limits on the amount of debt a borrower can have compared to his or her income. Some borrowers are therefore juicing their incomes in order to qualify. How? The internet is making it a lot easier.”